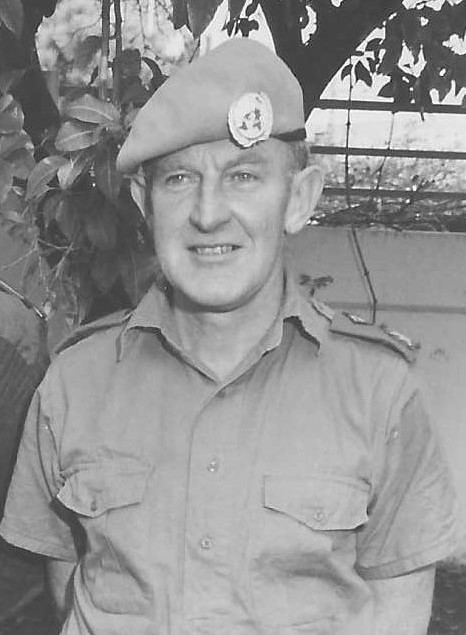 May Jim Rest In Peace

James Henry Murphy was born on 25th May 1936 and enlisted in the Defence Forces on 7th December 1953 as a member of the 28 Cadet Class. Commissioned on 28th November 1955, he was appointed to the Artillery Corps and posted to the 1 Field Artillery Regiment, Murphy Barracks, Ballincollig. A graduate of the Royal School of Artillery’s Long Gunnery Staff Course in Larkhill, Jim served as an instructor in the Depot and School Artillery, and in the Command and Staff School. Jim was Officer Commanding 2 Field Artillery Regiment and also served in Headquarters Curragh Command.

Overseas Jim served in the Congo (ONUC) with HQ Company 36 Infantry Battalion from November 1961 to May 1962.  In Cyprus (UNFICYP) he was Heavy Mortar Troop Commander with 19 Infantry Group.  Jim served two tours of duty with the United Nations Interim Force In Lebanon (UNIFIL), initially from May to October 1981 as Operations Officer 49 Infantry Battalion, and later as the Senior Operations Officer in HQ UNIFIL. He also served with the United Nations Observer Group in Central America (ONUCA), in the Group’s Headquarters located in Honduras, from December 1989 to December 1990.

On retirement from the Defence Forces Jim was actively involved in the Racing Academy and Centre of Education, Kildare.

Reposing at McWeys Funeral Home, Abbeyview, Kildare Town from 5pm on Tuesday with Rosary at 7pm. Removal on Wednesday morning to Saint Brigid’s Parish Church, Kildare Town, for Requiem Mass at 10.30am. Because of current government guidelines, a private family funeral will take place. The livestream link for the Mass is: mcnmedia.tv.

The committal service afterwards in Mount Jerome Crematorium, Harold’s Cross at 1pm may be viewed at: https://vimeo.com/event/153499

Members may wish to leave personal messages in the ‘Condolences’ section of Jim’s death notice on rip.ie – https://rip.ie/death-notice/james-henry-jim-murphy-kildare-town-kildare/469512