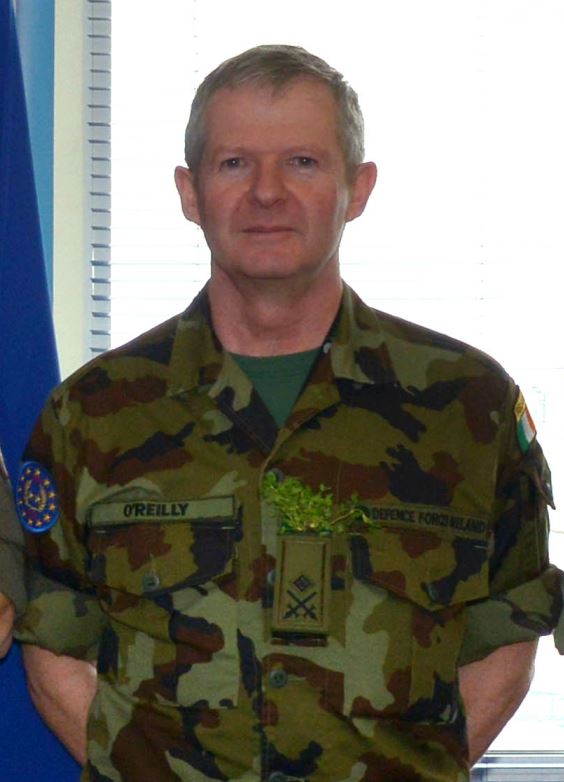 ARCO regrets to inform its members of the death of Lieutenant-Colonel Frank O’Reilly of Mornington, County Meath and formerly of Ballintemple, Cork City. On September 26th, 2021, peacefully at home in the loving care of his family and friends. Predeceased by his parents and brother Denis. Loving husband to Rita and dad to Cillian and Aideen. Sadly missed by his sister Eleanor, brother John, brothers-in-law, sisters-in-law, nieces, nephews, Defence Forces colleagues and a wide circle of friends.

May he rest in peace

Francis P. (Frank) O’Reilly was born in Cork City in February 1956 and joined the Defence Forces as a member of 51 Cadet Class (1974-1976). He attended University College Galway and was conferred with a Bachelor of Science degree. On commissioning into the Infantry Corps Frank was posted to 5 Infantry Battalion and subsequently 27 Infantry Battalion, spending a large part of his early years on the border in Dundalk, Castleblayney and Gormanstown. In Defence Forces Headquarters he held appointments in the European Sub Section of the Directorate of Operations and in Logs Admin of the Deputy Chief of Staff (Support) Branch. He was a Senior Staff Officer in 2 Brigade Headquarters and was Officer Commanding 2 Infantry Battalion.

Frank had extensive overseas service extending from several tours with UNIFIL, both in the Force Headquarters and with the Irish Battalion, in OSCE, SFOR, KFOR, UNTSO (where he was promoted to Lieutenant-Colonel in mission), MINURSO and EUFOR. Overseas his experience as a Senior Staff Officer was held in high regard and for his last tour of overseas duty he was Military Assistant to the Force Commander of the European Union Force in Bosnia Herzegovina. He finished this tour of duty in January 2014 and retired in February of the same year.

Frank had a wide range of interests that included running, canoeing, mountaineering, hill walking, and swimming and he remained active in many of these until very recently.

Reposing at home from 3 to 7 pm on Tuesday 28th September 2021. Removal on Wednesday to Star of the Sea Church, Mornington (A92 N202) arriving for funeral Mass at 11 am. Burial afterwards in Reilig Mhuire, Piltown.

In line with current Government Covid-19 advice on gatherings, attendance in the church is 50% of its capacity.

Members may wish to leave personal messages in the ‘Condolences’ section of Frank’s death notice on rip.ie – https://rip.ie/death-notice/frank-o-reilly-lt.-col.-retd-mornington-meath/470909