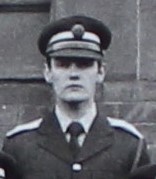 May he Rest in Peace

Senan McGrath was born on 30 June 1953 and was educated at Kilrush CBS. He enlisted as a private in the Defence Forces and from there joined 50 Cadet Class on 28 November 1973. He was commissioned into the Infantry Corps on 2 December 1974 and was posted to 2 Infantry Battalion, Cathal Brugha Barracks. During his career he served in 27 Infantry Battalion, Depot Ordnance, McKee Barracks Company, the Army Equitation School, 7 Infantry Battalion FCA, and Logs Support Battalion 2 Brigade.

The Funeral Mass will take place at Saint Senan’s Church Kilrush on Wednesday at 12 o’clock, followed by removal to Shannon Crematorium for 2 pm Service. Due to Government guidelines, a private Mass for 25 family members is permitted.

Members may wish to leave personal messages in the ‘Condolences’ section of Senan’s death notice on rip.ie – https://rip.ie/death-notice/senan-mcgrath-kilrush-clare/440677