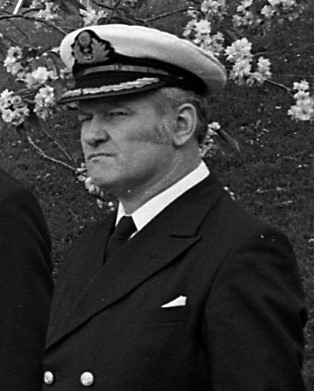 May He Rest In Peace

Pat, known affectionately throughout the Defence Forces as ‘The Sailor’ O’Mahony, was a member of 4 Naval Cadet Class. He underwent part of his cadet training at the United Kingdom Royal Navy College in Dartmouth where he won a Middleweight Boxing Divisional Championship Medal. In his early career he filled several seagoing and shore-based appointments as an Executive Branch Officer including Executive Officer on LÉ Cliona. He was subsequently transferred to the Supply and Admin Branch and for many years served in Naval Headquarters as Senior Staff Officer Supply and Admin. He also completed a tour of duty as Camp Commandant with UNIIFIL in Naqoura.

On 1 September 2016 Pat was among four crew members of LÉ Cliona presented with scrolls of commendation for bringing an on-board fire under control on 29 May 1962. Cliona was participating in a depth charge exercise south of Roches Point when one of the charges exploded prematurely under the hull, lifting the stern of the ship out of the water and rupturing fuel oil feed pipes in the aft boiler room. Leaking oil resulted in a serious fire. Pat, with members of the crew, successfully brought the fire in the boiler room under control.

A proud Keeryman and accomplished rugby player he played with Cobh Pirates RFC, Monkstown FC, Wanderers FC, many Naval Service teams and with McKee Barracks RFC into his mid-fifties.

Reposing on Saturday, 8th January 2022, from 1pm until 3pm at Frank Jennings Funeral Home, Greendale Road, Kilbarrack, Dublin 5. Private reposal at Pat’s home on Sunday. Removal from his home on Monday to arrive at 10am for Funeral Mass at Saint John the Evangelist Church, Greendale Road, followed by burial in Fingal Cemetery. Donations, if desired, to St. Francis Hospice.

The Funeral Mass will be streamed live on Monday 10th January at 10am via the following link: https://www.mcnmedia.tv/camera/st-johns-church

Members may wish to leave personal messages in the ‘Condolences’ section of Pat’s death notice on rip.ie – https://rip.ie/death-notice/padraig-patrick,-adrian-%C3%93math%C3%BAna-o-mahony-raheny-dublin/482119/