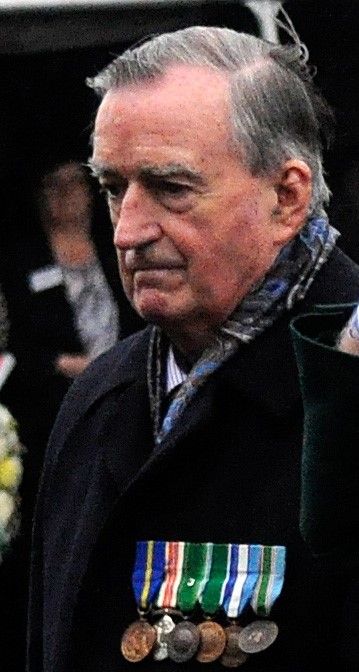 May Jerry Rest in Peace

Jeremiah (Jerry) Enright was born on 26th June 1929 in Tarbert, County Kerry. He enlisted in the Defence Forces as a member of 23 Cadet Class in 1949 and was commissioned on 8th May 1951.  He served initially in 4 Infantry Battalion in Cork and also with 15 Infantry Battalion FCA in Killorglin. Jerry served for a number of years in the Equitation School with his classmate Billy Ringrose. On posting to the Curragh Command Jerry served there with the Military Police and as Staff Officer, Operations. In the 1970s as a Commandant he was the Governor of the Military Detention Barracks in the Curragh when civilian prisoners were lodged there.  As a Lieutenant-Colonel he was Chief Instructor of The Infantry School in The Military College and was Officer Commanding, 27 Infantry Battalion in Dundalk. Promoted to Colonel he commanded 2 Infantry Brigade, Eastern Command and was Director of Intelligence.

Overseas Jerry served as Lieutenant, Platoon Commander, B Company, 33 Infantry Battalion, and it was he who led the first patrol to the scene on the Niemba Ambush on the morning of 9th November 1960.  He was a classmate of Lieutenant Kevin Gleeson, Platoon Commander, A Company, 33 Infantry Battalion who was killed with eight members of his patrol in that ambush on 8th November 1960. Jerry was Military Police Officer with 4 Infantry Group as a Captain in Cyprus from January to June 1965. As a Lieutenant-Colonel, he commanded 50 Infantry Battalion in Lebanon from November 1981 to April 1982.  Promoted to Brigadier-General he was the Chief Military Observer with the United Nations Military Observer Group in India and Pakistan (UNMOGIP) from 1990 – 92. Jerry Enright retired from the Defence Forces on 26th June 1992.

Reposing at his residence (Eircode W12 CX25) on Friday from 3pm with prayers at 7pm. Removal by Anderson and Leahy Funeral Directors from his residence on Saturday morning at 11.40am (driving to) Saint Conleth’s Parish Church, Newbridge for 12noon Mass. Funeral afterwards to Saint Conleth’s Cemetery, Newbridge. House private on Saturday morning please.

Jerry’s Mass can be viewed on www.newbridgeparish.ie/webcam-1

Members may wish to leave personal messages in the ‘Condolences’ section of Jerry’s death notice on rip.ie – https://rip.ie/death-notice/jeremiah-jerry-enright-newbridge-kildare/523238