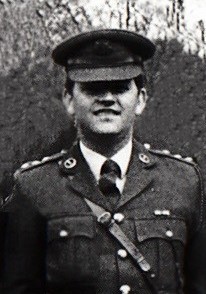 ARCO regrets to inform its members of the death of Commandant Eddie Fitzgerald, Ash Haven, Oranmore, formerly College Road, Galway and Whitebeam Avenue, Athlone. On 21st May 2022 Eddie died peacefully at University College Hospital, Galway with his beloved wife Helen, sons Stuart and Ed and only daughter Clodagh by his side.

Dearly loved and mourned by his wife, sons, and daughter, by his sisters Mary and Margaret and by his brother Frankie. A wonderful grandfather to Eva, Dylan, Jessica, Jamie, and Isabelle. Sadly missed by his grandchildren, daughters-in-law Olivia and Aisling, son-in-law Sam, nephews and nieces, the extended Fitzgerald and Grealish families and many Defence Forces friends and colleagues.

And until we meet again, May God hold you in the palm of his hand

Eddie Fitzgerald completed a degree in engineering at University College Galway and was commissioned into the Defence Forces as a Direct Entry Engineer Officer on 12th July 1976. He served for most of his career in the Western Command in a number of Engineer Corps appointments. Eddie served overseas in UNIFIL as Engineer Officer with the famous 46 Infantry Battalion in 1979-1980 under Lieutenant-Colonel Jack Kissane, who passed away in January. He was Assistant Force Engineer Officer at UNIFIL Headquarters in 1984-1985. Following the Gulf War, Eddie served as an Observer with the United Nations Iraq-Kuwait Observation Mission from April 1991 to June 1992. He also served with the European Community Task Force Yugoslavia in 1994-1995. An accomplished bridge player he was President of the Contract Bridge Association of Ireland in 1994 and held many interprovincial and national titles.

Reposing at Tearmann Mhuire within the grounds of the Church of the Immaculate Conception, Oranmore on Wednesday 25th May from 4.30 p.m. with removal to the church at 6 p.m. in advance of the daily Mass at 6.30 p.m. Requiem Mass will be celebrated for Eddie on Thursday 26th May at 12 noon. Funeral after Mass to Rinville Cemetery, Oranmore.

Mass is also broadcast on 105.3 FM in the locality.

The family would like to thank you for your thoughtfulness and support at this time.

Members may wish to leave personal messages in the ‘Condolences’ section of Eddie’s death notice on rip.ie – https://rip.ie/death-notice/eddie-fitzgerald-comdt.-retired-oranmore-galway/496623/