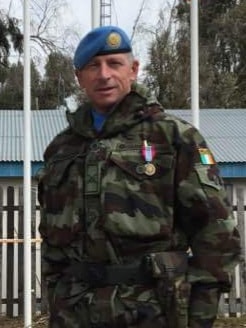 Diarmuid O’Donoghue was born on 14th January 1971. He was a member of 8 Potential Officers Course and was commissioned into the Infantry Corps on 3rd July 2000. Among the appointments he held, Diarmuid served as a Company Commander and as Second-in-Command with 1 Cathlán Coisithe. He was the Chief Instructor, The Cadet School when he passed away.

Reposing at Tearmann Mhuire in the grounds of the Church of the Immaculate Conception, Oranmore (H91 XC61) on Thursday evening 29th September from 5 p.m. to 7.30 p.m. Funeral Mass on Friday 30th September in the Church of the Immaculate Conception, Oranmore at 12 noon. Funeral will arrive at the church via the Dublin Road. Burial afterwards in Renville cemetery. Mass will be broadcast on parish radio 105.3 F.M. and can be viewed on https://www.oranmoreparish.org/live/

Members may wish to leave personal messages in the ‘Condolences’ section of Diarmuid’s death notice on rip.ie – https://rip.ie/death-notice/commandant-diarmuid-o-donoghue-oranmore-galway/509116