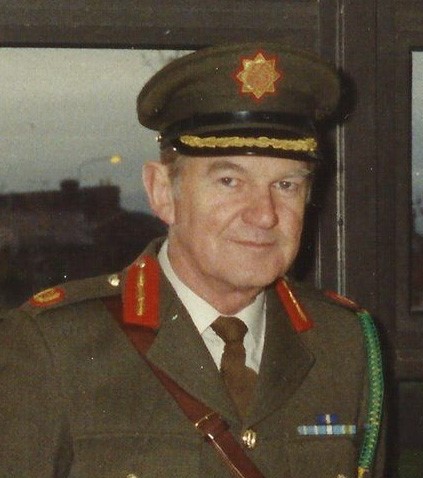 ARCO regrets to inform its members of the death of Brigadier-General Patrick (Pat) Grennan. Late of College Park, Newbridge, County Kildare on 4th May 2021, peacefully at home. Lovingly remembered by Nancy, his dear wife of 64 years, his children Declan, Barry, Róisin, Patrick, Orla, Siobhán, Sinéad, David and Naomi, and now reunited with his infant children Pat, Barry and Maria. Dear brother of Brendan and the late Maureen, Gene and Eileen. He will be sadly missed by his loving family, sons-in-law, daughters-in-law, and partner, twenty-one doting grandchildren, brothers-in-law, sisters-in-law, nephews, nieces and his relatives and friends. A special thank you to his carers Irena and Marzena.

Pat Grennan was born on 14th July 1929 and joined the Defence Forces as a member of 21 Cadet Class. He was commissioned as an Infantry Officer on 8th May 1950. He served with the United Nations Peacekeeping Force in Cyprus (UNFICYP) with 42 Infantry Battalion from April to September 1965 and was a military observer with the United Nations Truce Supervision Organization (UNTSO) in the Middle East.  He was School Commandant of the Infantry School in 1981 before he deployed to UNIFIL HQ in Lebanon from 1981-1982.

Due to current restrictions on public gatherings, a private family funeral will take place, on Thursday, 6th of May, at 11am in the Dominican College Church, Newbridge, with burial later at Saint Conleth’s Cemetery. Pat’s funeral will be live-streamed on www.dominicansnewbridge.ie. Family flowers only. Donations, if desired, to Engaging Dementia – Donations

Members may wish to leave personal messages in the ‘Condolences’ section of Pat’s death notice on rip.ie – https://rip.ie/death-notice/patrick-grennan-newbridge-kildare/457632#!photo